Hi guys
I have finally decided to write a personal blog where I can post my climbing adventures, nay my bouldering adventures. maybe it sounds better!
My first article regards august, although it isn’t the best bouldering period. It has passed a lot of time since I wrote my last blog on the web and this is due to some facts. The first reason is because I stopped my rock climbing in april in order to dedicate myself to study, whereas I had the high school final exam in june and it has gone well enough. The second one is due to summer, in fact from may it became really hard climbing in our usual spots. I stayed at home for all july together with my beastmaker and by going to climb at gym for training. In the end of july, Salewa called me to take part in L’aquila climbing festival at the beginning of august. L’aquila is a city situated in the south of Italy, where in 2009 april a big earthquake hit it, the village is still distroyed today and unfortunatly a lot of ruins are still into the buildings.

The climbing event presented 10 athletes who had to compete on three qualification boulder problems, and, the first three people, would be going to a final composed by an only problem. Concerning the program about days after, it was going to climb in a local zone for two days of bouldering. I left Bergamo airport on august the 3rd with my friend Gabri and on august the 4th we competed in the evening. The atmophere was amazing, because there was a lot of crowd watching the compt, the square was full and the tribune too. I think This fact was very positive and  I was really glad to see the happiness in L’aquila people, knowing what was happened three years ago. Talking about the organization of the competition I would like to congratulate with them because it was one of greatest compt that I have done. I think that the italian federation have to learn something about this master because the italian cup is shoddy today and a lot of guys are rightly leaving the competition’s world. Concerning the compt itself, the achievement wasn’t so good and I took the 7th place, gabri insted grabbed the final and an awesome second place!
The plans for the days after changed and local guys decided to carry us to “vado di sole”, a cool spot where doing some rope climbing. Unfortunatly, I don’t like this activity but anyway I climbed two really easy routes, a 6b and a 7a. The environment in vado di sole was perfect, it is situated in a big desert valley at the foot of Gran Sasso and, in the evening, I climbed two boulder problems situated below the routes getting one of the best sunset I have ever seen. The first boulder was  “la scarpetta di cavalletto” originally graded 8a+. It  is very essential and very cool, it starts with two two-finger pockets and it develops in a little limestone overhanging wall. I sent it after 15 mins and I think that it could be easier than that grade, probably 7c+. Ten minutes later I maneged to climb another cool line situated on the left of “la scarpetta”. I don’t know how it is called, but it is a really nice problem and its crux is a dynamic move from a orizzontal hole, that I had to match, to a three finger pocket. I think that also this one could have the same grade of its neighbour. The day after we went to “monte  aquila” where there is the famous prow called dosage but after some goes I stopped to try it because I was tired and we got home at 3 o’clock in the morning. 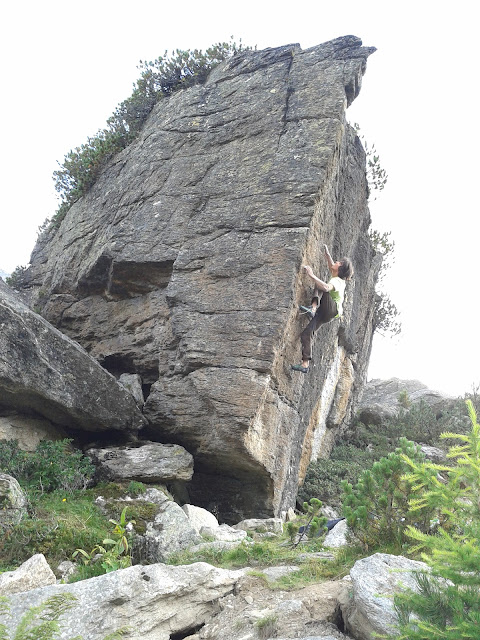 During the week later I had some training sessions and I planned with two friends of mine, marco and max, to go to Silvretta (AUT). We were motiveted because we would be stayed in a new place for us all and it wouldn’t have been so hot, despite the period. We left on monday 13 and the journey was a bit long. When we arrived we immediatly went to the camping and after having builded my tent, at 6 o’clock, we started the path to reach the spot. We knew that the area required some minutes of walking but we didn’t think such a lot as truely are. Furthermore, the guide was hard to understand in fact we got lost and we found the first boulders after one hour and fourty minutes of fucking walking.We reached the sector of niviuk, a problem graded 8a on the guide that seemed quite good to climb.I warmed up on a little easy highball and then I flashed a great arete named flechtenkante then I flashed niviuk too. Maybe the grade of this one could be more 7c than 8a.
The evening was over and we ate in the camping with other two friends of us, Fabri and Donatella.
The second day, with the ideas of the path clearer, we left the camping and we reached the spot in “only” fourty minutes of walking. We climbed on anam cara’s block and I did a flash attempt on the famous “british airways” 7c+.Unfortunatly I dabbed on the pad and I crushed it on the second go from start. I also tried anam cara 8B+/C a bit, but I managed to do just the first two moves.
In the afternoon we went to memento sector that was other 40 minutes far by walking from anam cara. I tried it with a spanish guy but after 20 minutes I decided to leave it because I wanted to keep skin and energy. In the evening I tried a nice prow called X-ray and I figured out my beta in one session, then I tried to link all the moves but I did some memory misteakes during the climbing, in fact I didn’t remeber every steps when I sought to climb it and I miserably fell down. I took a little rest and I went to check out other lines like golden gate and rongbuk. They are both amazing and I hope to come back there to try them. After the rest, just before the sunset, I refresched my mind about the beta and I did X-ray. I think that 8A could be ok!
Third day was next but when we woke up the weather for the day after didn’t seem good so we had to leave at the end of that day. In the mornig we went to british airways again where Marco climbed it and we were happy for him! Once finished our plans there, we decided to go to pretty belinda, a traverse 23 moves long which covers a huge boulder. I did it on the third go from start and I suppose that 8A could be the right grade for a long traverse like that. It has been really fun having climbed pretty belinda because it was a different way of climbing respect pure bouldering and, sometime, I think that strength-endurance problems can increase my motivation.
The short climbing holiday in Austria ended and we came back home really late that night. It was the first time in Silvretta for us and in my opinion it is a good place for the summer. The environmental impact is high, some lines are deserving and, although the path is very long, we had a positive view of that spot. Here a video about the little trip and some pics by Marco Pelle.